The other side of the canvas, part 6

Quick links
Part 1, Abstract and The End of Man
Part 2, Psychoanalysis in The Order of Things
Part 3, Seminar XIII and the object a
Part 4, Window not mirror: Las Meninas
Part 5, The Street: Lacan reads Balthus reading Velázquez
Part 6, The poetics of the window: truth of the analyst–You are here.
Part 7, Conclusion, References, Photo Credits

6 The poetics of the window: truth of the analyst

Albrecht Durer, illustration from On Measurement

It’s time to redeem my promise to fill out Lacan’s opposition of mirror and window with a deeper understanding of the latter; for it is precisely in this, an investigation of Las Meninas as commentary on the constitutive view of a painting as an ‘‘open window’’ first articulated in the Italian Renaissance, that Lacan argues most extensively in his response to Foucault. Indeed, the introduction of Lacan’s interpretation of Las Meninas comes in the midst of a discussion of renaissance perspective theory (Session xvi)—and particularly of that method of constructing ‘‘correct’’ one-point perspective developed by Leon Battista Alberti, the so-called ‘‘construzione legitima’’. Such pictorial perspective seems to locate the absent subject (the ‘‘for which’’ of representation) in the vanishing point at infinity; one could even say that the historical dialectic traced by Foucault assumes precisely such positioning of subjectivity—so that its heterogeneity can be recouped as transcendence of or, later, excess to representation. In other words, the entire ‘‘history’’ recounted in Les Mots et les choses depends upon the implicit identification of the modern subject as the absent ‘‘pinnacle’’ of a representational pyramid, an excluded point ‘‘for which’’ representation occurs.

Given such an assumption on Foucault’s part, it’s worth tarrying a bit with the Albertian ‘‘demonstration’’ upon which it is founded, an operation that we might reconstruct in several steps: first comes an important theoretical insight, one implicit—but only implicit—in the painting of Masaccio and other contemporary Florentines; it is the conception of a painting as, in Alberti’s words, an ‘‘open window,’’ a planar cut in the ‘‘visual pyramid’’ running from the eye of the viewer (importantly, for Alberti the viewer is always monocular, always a ‘‘cyclops’’) to a scene viewed.31 The conceptualization of the painting as window is what allows Alberti a mathematically correct solution to the practical issues facing the painter wishing to represent naturalistically, and also what produces the model of subjectivity as point upon which Foucault depends in his account from Les Mots et les choses. 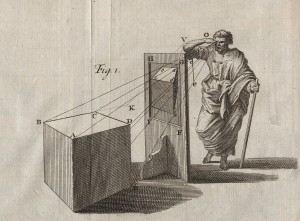 The Picture Window: illustration from an 18th century treatise on perspective 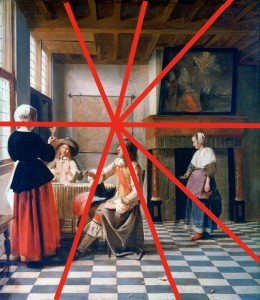 By using this conceptualization Alberti arrives at the so-called ‘‘legitimate construction,’’ which responds to an extremely common problem for the painter of Alberti’s day, namely, how to complete the correct representation of a tiled floor in ‘‘one point’’ perspective. The idea was that, if a painter could do that, then, using the floor tiles of known dimension as guide, on the basis of how many such squares they occupied, he could also correctly represent the relative sizes of objects at various distances. And even this problem was simpler than it sounded; for, though without theoretical justification, artists in the preceding 30 years in Florence had figured out that lines of recession—lines running at 90 degrees to the plane surface of the picture—all seemed, when the artist stood directly in front of that same picture, to converge at a single point. The result of that insight is that those sides of the square floor tiles could be correctly represented simply by having them move toward what we now call the ‘‘vanishing point.’’

Alberti’s ‘‘system’’ of perspective consists of his solution to the problem of correctly representing the other dimension of the tile floor, the lines parallel to the picture plane. But the interesting thing about this solution is its practical, not to say praxical, nature. In proposing his solution, Alberti brought his skill from earlier work as a surveyor to bear. Effectively, figuring out the parallel lines correctly demands a classical surveying ‘‘move,’’ where the one measuring angles projects his position to a point at the same distance from the picture plane but at right angles to the ‘‘edge’’ or ‘‘frame’’ of the picture. From that place, and imagining the canvas literally to be a window, the ‘‘surveyor’’ could physically notch it at the points where the ‘‘rays’’ from his eye would intersect it on their way to the parallels marked on an actual floor continuing on the ‘‘other side’’ of the glass.32

Now, it is this displacement, this movement of the subject necessary to actually constitute perspective, which sets up Lacan’s response to Foucault. Just as we already saw with regard to Las Meninas, indeed, as the explanation for that effect, the construction of a ‘‘world’’ of representation demands not only a dissymmetry between a representing subject and what it represents for itself as present to it, but also the inclusion of a temporal disruption in the tableau of ‘‘presentness’’ between subject and world. The world can only be present to the subject—the subject can only be present to itself—on the precondition of a ‘‘move’’ not present to it. Indeed, Lacan goes to great lengths to demonstrate the irreducible necessity of this second, unlocated and unlocatable ‘‘subject-point’’ for the construction of any concrete painterly perspective.33

Or, to put this in another way, Lacan’s ‘‘counter-demonstration’’ to Alberti’s in the 16th and 17th sessions of Seminar XIII shows how the ‘‘open window’’ of perspective actually only works when the window is ‘‘closed’’—when the surface of the picture plane is materialized by a process of marking (both of the receding and the ‘‘parallel’’ floor lines) which thickens the planar surface, making of it a kind of transparent or ‘‘partial’’ object—the window’s ‘‘glass.’’ And this ‘‘thickening’’ is what Lacan himself plays with constantly in the 17th and 18th sessions of Seminar XIII, using the variants of ‘‘montage,’’ and the idea of painting as a ‘‘screen’’ for vision.34 The non-simultaneity of the subject is simply the reverse of this constitution of a ‘‘partial object’’ in the surface of the picture plane, the space on which the figures of representation then appear. What’s at stake here is something like the transcendental condition for the possibility of the analysand’s experience of destitution, for the breakdown of ontological consistency itself. But isn’t that condition, as it is discovered in the history of painting, precisely the constitution of that space within which fragmented ‘‘pieces’’ of representation, regardless of value or context, emerge? Only based upon this discovery can Velázquez play with the displacement of figures in his Meninas or Balthus radicalize this play; and, as Lacan himself notes, only on the basis of this discovery does painting increasingly become a matter of montage, of mounting things on a neutral surface, as it does in the twentieth-century.35 In each of these cases, by forcing us to see the painting precisely as a surface for the composition of anything, the artist makes the transparent or invisible part-object visible, allows us to see what, as Lacan notes, we make invisible to look into the representation.36

In this sense, for Lacan, the practitioner of montage or collage is precisely like the psychoanalyst, who makes manifest the ‘‘support’’ for the analysand’s fantasy, the thing that allows the world to appear ‘‘normally,’’ as a totality while itself withdrawing from presence. The analyst’s task is to represent the ‘‘truth’’ of that fantasy, to produce the non-object that now appears. As Lacan puts it,

… Something is produced in the construction of vision which is nothing other than what gives us the basis and the support of the fantasy, namely, a loss which is none other than the one that I call the loss of the objet a…37

If I wrote above of an experience of the analysand challenging any presentation as science because its content challenges the very ontological closure assumed by every system of truth, then here we must add the necessity that a certain truth always potentially accompany it. Vitally, however, this is not truth for the same subject; rather that truth, which is quasi-transcendental understanding of the possibility of the analysand’s anxious condition, can only appear for another, for one who accesses the ‘‘partial object’’ in a fundamentally different garb than anxiety. To the analyst, the object a appears as part of a regime of knowledge, but only of a knowledge once removed, a science of what ‘‘must be the case’’ in order for an experience of ontological groundlessness to be possible for the analysand.