The other side of the canvas, part 5

Quick links
Part 1, Abstract and The End of Man
Part 2, Psychoanalysis in The Order of Things
Part 3, Seminar XIII and the object a
Part 4, Window not mirror: Las Meninas
Part 5, The Street: Lacan reads Balthus reading Velázquez–You are here.
Part 6, The poetics of the window: truth of the analyst
Part 7, Conclusion, References, Photo Credits

Perhaps the best way understand what Lacan wants us to understand about Las Meninas is to look briefly at Balthus’ La Rue. In what sense can Lacan legitimately claim of Balthus’ painting, as he does in Seminar XIII, ‘‘that is Las Meninas’’?25 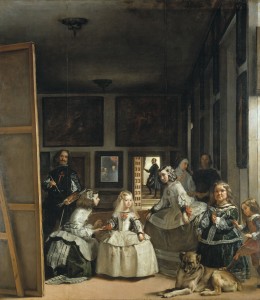 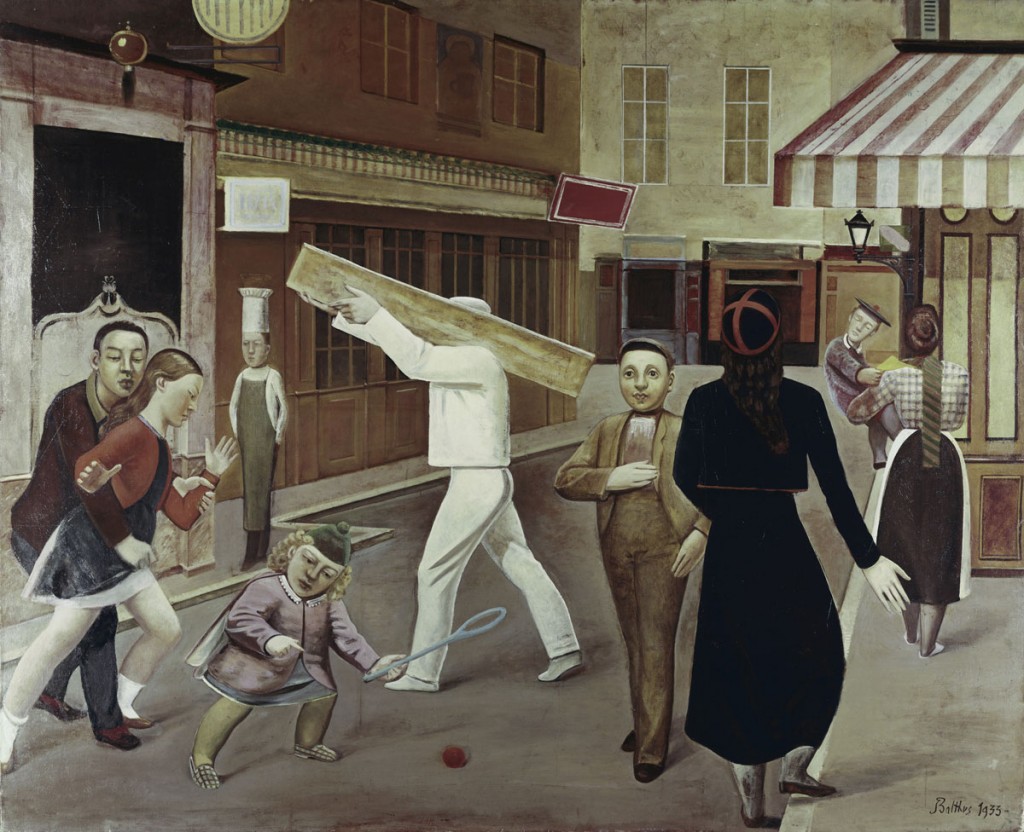 In some ways, that’s an easy question to answer; indeed, while, to my knowledge, no art historian has followed out Lacan’s insight (there clearly are other sources for the painting, from Piero della Francesca through John Tenniel of Alice in Wonderland fame), that observation nonetheless has a certain power to bring La Rue suddenly into focus, to force our view of the painting into something approaching a Gestalt shift. Beyond certain vague and inexact parallels (the space of the studio in the Alcázar Palace and the Parisian Street depicted in La Rue, etc., etc.), two related details establish Balthus’ reference to Las Meninas beyond question. In fact, the two features, collapsed together into a double group in the lower left hand corner of La Rue, are responsible for much of the outcry surrounding this painting; they are the figure reaching out to grab the crotch of the playing girl in red and the girl ‘‘her’’self (more on the scare quotes below). In classic symptomatic fashion, the interaction of these two figures both calls attention to their importance in the painting and distracts viewers from their real import—an importance that Lacan alone insists upon; for the two figures are unmistakenly taken from Las Meninas and the representations there of Velázquez himself and of the dwarf, Nicolas Pertusato, who occupies the far right corner of Velázquez’s tableau. Both the facial features and gazes of these figures are unmistakable: Balthus has ‘‘taken’’ them from the Meninas.

Still, this source for identification, while it suffices to explain Lacan’s ‘‘Eureka!’’ moment, leads, in the final analysis, only to puzzlement; for, once one does shift perspective to see the whole of The Street as a borrowing from the Meninas, the debt becomes increasingly urgent but also increasingly mysterious, difficult to pin down with a rule for translation. Take, for example, the detail of the mirror itself, with its image of Philip the Fourth and his Queen: Balthus has shifted the figures in the mirror to the right of his painting, personing them with the figures of a manikin (King) being carried by a woman whose coiffed hair replaces the queen’s face. Framed as they are against a blank storefront at the back of Balthus’ space and a door to right (and somewhat toward the foreground in the representation), these figures seem both odd representatives of ‘‘the subject’’ from Velázquez and, more to point, oddly reversed. They seem, in fact, to present a mirror-image of the mirror in Las Meninas. Indeed, once one notes this mirror reversal, much in the painting comes into a different focus, as though La Rue were itself the view of the studio in the Alca ́zar palace as it might appear in a mirror: the vanishing point for the space of La Rue as a whole is to the left instead of the right as it is in Velázquez’s painting; there is a ‘‘second’’ figure of the painter to the right of La Rue—identified by black attire and, in her hat, the ‘‘cross of Santiago’’ key to the earlier mise en scene—in precisely the reversed position of the Velázquez figure from the classical painting; even the enigmatic figure located at the door leading from the studio in Las Meninas corresponds in reverse to the flat figure of the cardboard chef now on the left. Still, this idea that La Rue gives us a literalized ‘‘through the looking glass’’ vision of the Meninas only goes so far. It cannot, for example provide an explanation for why Velázquez, the painter, has been split into two representations (the molester and the turned woman on the right); nor can it do justice to, for example, the detail of the girl/dwarf’s red ball, which occupies almost the right space to substitute for the red pitcher in the infanta’s hand from the Meninas, or of the guard who, represented by the robotic striding figure, simply moves toward the foreground in Balthus’ composition. And all of this simply leaves aside the really enigmatic translations of Velázquez in La Rue, where the infanta seems to be substituted by a white-clad carpenter figure holding a board which is all that remains of the depicted canvas from Velázquez’s painting.

In other words, the identification between Balthus’ painting and Velázquez’s is both undeniable and enigmatic, resistant to any simple rule of translation. We know it to be the case but can’t put our finger on exactly how it happens. Of course, that works well for Lacan, whose entire interpretation of Las Meninas is that it is meant also to call into question the possibility of reducing painting to a mirror of truth. It’s ‘‘all there,’’ we might say—each of the elements of Las Meninas, but now mixed up in a way that lacks any coherence, any sense of the totality of a ‘‘world.’’ This interpretation explains the main fact in the history of La Rue’s early aesthetic reception, namely, its embrace by the surrealist group on the grounds of the robotic disconnection between its figures.26

Here, finally, we can fill in at least one meaning of the contrast between painting as ‘‘mirror’’ and as ‘‘window.’’ The mirror lacks time, lacks memory: it shows only what is present to it as it is present to it. It is thus incapable of the kind of mixing up that Balthus engages in with Velázquez’s figures. It cannot take them out of a context and ‘‘paste’’ them (Lacan repeatedly plays with notions of phantasy and of the painting here as ‘‘montage’’) into another. But the painter, like the surface of a film or a television editor (Lacan references both) can retain the image; he can take the poses of figures from one time or one place and reproduce them at another time and/or place. The window can ‘‘mount’’ (‘montage’) different times and places into a new present, a new place.

Armed with this interpretation of La Rue as window, though, we can return to Lacan’s comments on Las Meninas to see that, for him, Velázquez himself is already engaged in this kind of ‘‘windowed’’ treatment of the figures in his court painting; so understood, not only does the distance of the painter-figure himself from his canvas gain new significance but we can also make sense of Lacan’s underscoring of the way that the gazes of the figures in the scene of Las Meninas fail to interact.27 In other words, the trick here, the virtuousity of the painter, is that, despite their having been correctly represented for the expected tableau portrait— each in the proper perspective—these courtiers (and assorted fools, animals, etc.) give all the indications of having been depicted from somewhere else and at a different moment: Lacan speaks of the visible ‘‘furrow’’ of the painter’s ‘‘passage’’ through their midst as recorded in those various visual foci.28

Furthermore, Lacan’s initial discussion of the Velázquez (session xvii) turns on the impossible necessity imposed on us by the painter—Lacan refers to it as an ‘‘embarrassment’’—that we locate both a mirror and the royal couple at the same spot ‘‘in front of’’ the picture plane. In other words, the painting itself ‘‘composes’’ its figures in a way that is meant to be seen as artificial at the same time that it seduces us into imaginary identification.29

Vela ́ zquez introduces a temporal pause, a fundamental pastness, into his painting—one that, so Lacan, forces us to reconsider the entire illusion that the Meninas gives us a matched present between the scene in the painting and the invisible representation in the turned canvas. Instead, for Lacan, the turned painting shows what could not be seen at the moment depicted in Las Meninas—a depiction wherein the ‘‘figures’’ represented appear to us as they are after their depiction. And this reintroduction of a non-presence, a lapse of time, into the painting ‘‘with a stroke’’ invalidates all the guessing games filling in the content of the turned canvas: the painter could have painted anything at all there; or, more radically, there need be no relationship between Las Meninas and the picture in the picture.

Isn’t this ‘‘disturbance’’ of our normal way of seeing things (whether a painting or our world) precisely the virtue of painting as window, just as it is the most important potential of the experience of the Lacanian analysand—forced to traverse the very fantasy holding reality together, to undergo a bottomless anxiety, a suspicion whose ‘‘object’’ both does and does not exist? The first meaning of Lacan’s analogy between painting and analysis is this experience of the analysand, of the one for whom the arbitrariness of a world appears. To experience the window as window is to be subject to this uncanny arbitrariness of experience. Elsewhere, Lacan famously proposes that anxiety is not ‘‘objectless’’ as both Kierkegaard and Heidegger take it to be: for Lacan, rather, anxiety has an object that, in its sublime lack of focus, is non or even anti-objective. Anxiety before the window of painting indicates the proximity of object a.30

Go to Part 6, The poetics of the window: truth of the analyst.