The other side of the canvas, part 4

Quick links
Part 1, Abstract and The End of Man
Part 2, Psychoanalysis in The Order of Things
Part 3, Seminar XIII and the object a
Part 4, Window not mirror: Las Meninas–You are here.
Part 5, The Street: Lacan reads Balthus reading Velázquez
Part 6, The poetics of the window: truth of the analyst
Part 7, Conclusion, References, Photo Credits

If we begin from the site of their agreement about Velázquez’s Las Meninas, if we start from a concord on the fact that this is a painting about painting and one that takes up this theme in its representation of the turned canvas in the canvas, the painting in the painting, then we are immediately struck by the difference marked by Lacan’s polemic against mirrors. Or, to be more precise, Lacan’s objection to a ‘‘mirror’’ understanding of knowledge is itself related to an extended argument in Seminar XIII against any equivalence between the ‘‘canvas’’ for painterly (or epistemic!) representation and the mirror surface. For Lacan, as opposed to Foucault, the functions of mirror and painting must be strictly contrasted. As Lacan puts it, ‘‘the relationship of the picture to the subject is fundamentally different to that of the mirror.’’13

I will return below to the nature of this difference and Lacan’s argument for it in terms of the history of painterly perspective, but it’s important here to indicate how Lacan’s understanding of this contrast transforms his interpretation of Velázquez’s masterpiece: for Lacan, the mirror in the painting is rhetorically polemical and non- substitutable for the painting’s ground. Its meaning is, ‘‘This is what I am not.’’ Indeed, Lacan goes to considerable lengths to oppose, not only Foucault’s interpretation of Las Meninas—according to which the turned canvas is a royal portrait—but also another popular art-historical interpretation—in which the turned picture depicts the very scene shown in the painting but itself as painted in a mirror. This second interpretation, too, depends upon a mirror, in this case a large looking- glass placed at the ‘‘viewpoint’’ and stretching across the audience chamber from which we (the viewers) seem to see the picture.14

Seeing it as an essay about painting and not about mirrors, how, then, should we interpret Las Meninas? Lacan’s repeated pictorial explanation takes the form of an analogy with Magritte’s The Human Condition, a painting, famously, of a painting of a window, with the depicted canvas placed in front of the very window whose scene it correctly represents.15 The barely noticeable contours of the stretcher disrupt our view into the represented space and through the window—both the Albertian window of Magritte’s picture and the depicted window in that space. Our gaze is brought up short by this ‘‘representation of representation,’’ but in a fashion that doesn’t simply reinforce entrapment within a representational labyrinth. The painting in the painting also displaces the subject from its tarrying in imaginary depth and its symbolic elaboration to the very surface of representation.16 Or, to put this more precisely, the effect of Magritte’s game in The Human Condition is both to intensify the representational illusion (‘‘oh, if only that painting weren’t there we could see out the window!’’) and to call it into question (‘‘There is no ‘outside’ of the window!’’) 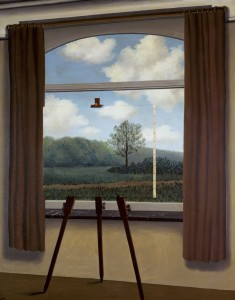 It’s not a big jump to see the reversed stretcher in Las Meninas as playing the same role as the window-picture did in The Human Condition.17 First of all, as Foucault announces, the combination of our placement at the royal viewpoint and the turned canvas in the painting vivifies the representational illusion.18 But, for Lacan, the task that Velázquez gives us is not to figure out ‘‘what’s going on?’’ in the illusory represented space but rather both to investigate what this strong illusion hides and to examine what produces the power of the representational illusion that we might enter the space of the artist’s studio in the Alca ́zar palace, passing through the ‘‘open window’’ of the painting.19 In other words, Lacan insists that we pay attention to the way Las Meninas, like The Human Condition, challenges mere representational illusionism.

Velázquez uses the artist’s depiction of himself in a manner equivalent to the ‘‘slip’’ between the depicted canvas and the window it covers in The Human Condition. Lacan notes the distance that the figure of Velázquez in Las Meninas takes from his canvas: he (or his avatar) is not painting at the moment of representation.20 This stepping back from representation becomes, indeed, the key for Lacan’s interpretation of Las Meninas, whose primary device—the turned canvas—forces us to ‘‘look again’’ at the painting, to see it, for ‘‘the first time’’ in the history of modern painting as Lacan boldly claims, as something other than mere representation of some other reality.21 For Lacan, Velázquez provides a token or ‘‘representative’’ of representation (Vorstellungsrepraesentanz, using Freud’s term) that makes us aware that painting is not only a representation, not only something one looks through or into but also something one must look at.22

It is in pushing this interpretation of Velázquez’s painting that Lacan introduces two related observations that complete his ‘‘picture’’ of it: the first is that the key ‘‘space’’ in Las Meninas is the foreground area between the depicted and the actual canvases or, if you like, between the reversed painting and the actual ‘‘picture plane.’’ Just as was the case with the window in Magritte’s painting, in producing a space or pause, Velázquez is inviting us to see that his painting—the one he painted, not just the one he depicted—is an object: it is not the same as the space we look ‘‘into’’ but stands in front of that. Secondly, by means of a fictional dialogue between the figures of the infanta and of the painter, Lacan ties this empty liminal space in the painting to the question of painting itself: Dona Margerita’s gaze at this space ‘‘behind’’ the depicted canvas seems to demand, ‘‘let me see’’ the representation itself23; to which—so Lacan—the painting itself addresses her with the pronouncement, ‘‘you do not see me from where I am looking at you.’’24

What is this injunction about? This is the central mystery of Lacan’s interpretation of Las Meninas, one that, in the eighteenth session, he answers only with a double reference—first to phantasy and the ‘‘gaze’’ constitutive of that and then to Balthus’ painting, ‘‘The Street,’’ which was currently on exhibition in Paris. In both cases, something about the painting qua painting, as ‘‘window,’’ seems to confound our efforts (like those of the infanta in Velázquez) to see it as a mirror.